On Saturday, July 12, 2014 the members of East Madison Baptist Church came together to prepare for a block party with more than 30 people from a mission team in North Carolina.    There was rain that started to come down as soon as the block party started to get set up in the side yard.   With that in mind members of the Greater Cleveland County Baptist Association mission team took their places around the church building and began to pray for the members  of East Madison Baptist Church and the community of Madison.    After being in the rain for two hours and no one coming everyone decided they would reschedule for Sunday.

On Sunday the block party was rescheduled for 6:00 p.m.   At 4:00 p.m.  more than 50 people from both groups gathered to pass out flyers in the streets surrounding the church.    More than 200 people came to the block party with many people staying past dark.  Several people accepted Christ during the block party.    The members of East Madison Baptist Church did a great job engaging their neighbors sharing with them about the church and finding out about the people who live right next to their building.

We found this block party to be a work of the grace of God.   Not only was the block party not cancelled due to rain but the time was a resounding success.   Members of East Madison took the time to be trained on Saturday night how to encounter people.   Then they followed through by meeting and getting to know their neighbors in a way they had never done before that time.    God uses simple tools like block parties to share the gospel and help our churches reach out to those who are close to them but far from God. 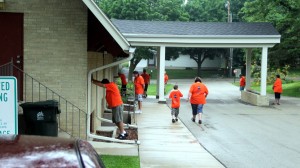 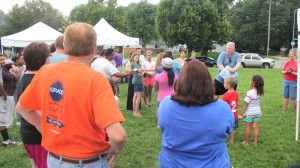 The block party in full swing on Sunday, July 13.