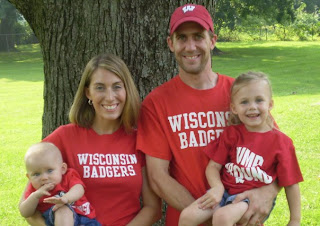 This coming January the Central Baptist Association will be blessed to have Aaron Jozwiak (pronounced Joze-whack) and his family coming to Madison to plant a campus church. Campus Community Church in Madison will be the mother church for this church plant. Aaron will be coming to us as a Nehemiah Church Planter approved missionary of the North American Mission Board. Aaron has also been preparing himself by visiting campus church plants around the United States.
Aaron and Tia Jozwiak along with their daughters Madison (7/9/06) and Avery (2/2/09) are moving to Madison, WI in the beginning of 2010 with the intentions of planting a church near the University of Wisconsin. Both Aaron and Tia are natives of Wisconsin and have a great burden for the lost in the state. Over the past few years Aaron and Tia have lived in Louisville, KY as Aaron attended Southern Seminary, and Tia was a student in the Seminary Wives Institute, which is a branch of the seminary.
Before heading to seminary Aaron served at Graceway Fellowship in Green Bay which he says was one of the greatest joys of his life. It was at Graceway that Aaron and Tia started a college ministry that met in their home. It was through that study that both Aaron and Tia really fell in love with ministering to college-aged individuals. “It was great to see each week the members of the Bible study come back with not only excitement but also with their friends. There were some weeks I do not think we could have fit one more person in our home”, says Aaron. He further adds, “Both Tia and I feel that God used that study to set our course towards church planting. It was exciting for us to start with basically nothing and watch the Lord grow it.”
As the Jozwiaks start their church planting work in Madison perhaps their greatest goal is that of being a reproducing church. “A few years back, as we considered where the Lord would have us church plant, we got excited about the potential for sending out future church planters by planting near a university. The University of Wisconsin is not only the largest university in the state but it also is the home of many future leaders.” Aaron goes on to say that “it is our prayer that God would use our church planting efforts to help start other churches throughout Wisconsin and beyond.”
Aaron and Tia are well aware of the difficulty of church planting in Madison, as the city has earned the reputation of being a church planter’s graveyard. They ask that you would pray that they would be found faithful and that God would reap a harvest of saved souls in Madison. If you are interested to learn more about Aaron and Tia go to www.youtube.com and search “Madison church plant” to view an informational video they put together which describes their hopes for Madison.